Intro:
One day the world will stop moving, but we don't abide by rules
And everything that we're doing, they told us that we couldn't do
Everyone said I was different, than all the only kids at school
I never really could pay attention; all I did was just move 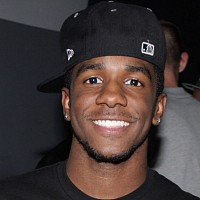 [Verse 2:]
This my stop let me get off
Tell them other boys they can get lost
I don't give a damn if they roll with Peter Pan
Man them colors ain't been fly since criss-cross
I'm in the Mid where the bids don't look (look)
Where the kid gets booked
I'm on a plane with a dame that wanna join the fly-high club
Tell the kids don't look (ha)
They tried to say that he won't blow (why)
Cause I'm a nerd but she don't know
Until she come to my home and get on her knees (and what)
And play with G.I. Joes
Cause I'm a nice guy in some mean ass clothes
And flow so cold even Friya froze
Sho nuff' I got a Leon flow
So you gotta say yes if you don't know, now
[Hook]
[VERSE 3:]
Look, I know you ain't used to me
And I know what I used to be
And I know that we just met
But baby girl would you move with me?
I mean truthfully, I mean usually
I mean actually, I just happened to be
Just writing to waste time and I happened to see
That all the words rhymed so naturally
So naturally, honey actually
It was rapping to me without rapping to beats
Everybody got a story that's what happened to me
And the very next day I was sagging my jeans
I felt cool, they was laughing at me
Had a veelie skullie and like half of my teeth
Things got ugly when my mom said honey
You trying to be a rapper I ain't happy to see
But I promise Ms. Lagranze, I'mma prove to you if I can
That this is all gonna pay out in the end
And we gon play this loud in the Benz
Tryna lay up in the hills when I'm paid
With a girl named Beverly house is a maze
On the beaches kept chair raised
Sitting back, nigga, when I begged for a raise
Maybe I'll get a girlfriend
Or maybe it's too soon
Maybe she'll think I'm cool
Come over and we can spoon
But I never get comfortable
Cause I always gotta leave
And it's hard to keep my attention
Cause they say I got A.D.D. but
[Hook]