RAPUNZEL:
My hair’s so soft, but I ball so hard
That my bed head brings all the boys to the yard!
I was the caged bird singing busting back on the scene
This little lost princess is the long-locked queen
Of Rap-Un-Zel! Right in my name!
Coming back for my crown with my magical mane!
I’m a chef, guitarist, painter, potter, scholar, singer, dancer
Knock me but like Elsa’s door, you haven’t got an answer!
Your snowflake’s not unique and you’re past your peak
Even the silver in your hair is a losing streak!
I can’t believe how dumb you are, Hans took you for a sucker
I’ll say it twice, you stink on ice. Did I mumble motherfucker?


ANNA:
I’m not ANN-a, I’m AH-na! I go ham when I wanna!
You can’t handle the drama, slam a damn prima donna!
A once upon a timer, I know better than momma
Frozen fever so hot, I hafta chill in a sauna!
Blondie’s only got three books and a mother that betrays her And it doesn’t even phase her that she raised her with no razor
Sunflower in a tower, tricked by her kidnapper?
Me? I woulda capped her and frickin’ witch slapped her!
You’re not the brightest lantern, and your mug is just fugly
The word on the street is that "your duckling ain't snuggly!"
Agoraphobic bore, and I don’t know what’s sadder?
That you’ve never worn shoes or that you’re just a rope ladder!
FLYNN:
I'm kinda like this oaf, but I'm dashing, smart, and beauteous
He's a bigger horse's ass than Maximus's gluteus!
My dream came true, the girl, the castle, the money
I'm the wanted man she wanted, man, the future looks sunny!
This dapper rogue rapper's now a royal insider
And since we got hitched we are both Flynn riders!
You think you're hot shit? Well, your sister was colder
I'll melt the ice in your heart. When I heat up, I smolder!
fotky 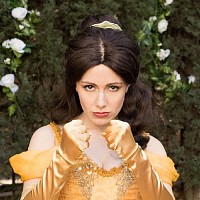 KRISTOFF:
You're a fraud, Eugene. I'll pop your head like a twist-off!
This robber's gettin' clobbered when Kristoff gets pissed off!
My reindeer Sven is so damn frosty
Santa's like:
SANTA:
"Damn, that's a cold-ass donkey!"
KRISTOFF:
I love Anna, not her title. I would never two-time her
You're a terrible rhymer,a tower and social climber!
You're a colossal debacle, even Olaf knows you're awful
You're as crooked as your nose. I should dust you like Gothel!
RAPUNZEL:
Can I end this business? Hells yes, I can!
With the business end of my frying pan!
Tied up and dangled, strung up and strangled
You'll have a brush with death when you're messing with Tangled!
FLYNN:
So hungry for a husband once you left your isolation
RAPUNZEL:
We saw you getting Hans-y at your sister's coronation!
Snap engaged to a villain before you cuddled up with Thor
RAPUNZEL AND FLYNN:
Looks like any dude'll do when you're love's an open door!
RAPUNZEL:
This Arendelle airehead has a brain full of holes
From when her mind got wiped by those ridiculous trolls!
Of course you Norses fight but in the end you always lose
Your odds are sinking faster than your parents on a cruise!
ANNA:
You've got an avalanche of dandruff and lice by the million!
You need a lake of shampoo and a full body Brazilian!
While we're on the subject and I don't mean to push
But does your carpet match your drapes?
That's like an eighty pound bush!
KRISTOFF:
I'm the fixer-upper lover who's as strong as an ox
I go hard all night long 'cause my family rocks!
By the Northern Lights I keep her warm at night
And I'm moving more ice than Walter White!
ANNA:
Can I say something crazy? Check how it affects ya?
Your hair is a let down and no one respects ya!
So get back in your prison atop that tall architecture
Won't be coming back for seconds because Anna wrecks ya!