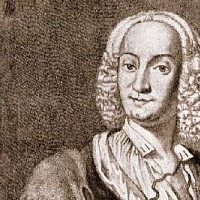 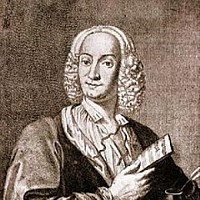 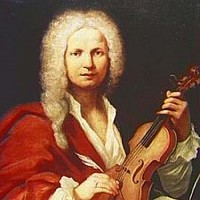 *Alfredo Bernardini on the oboe used in this performance:
Original woodwind instruments that have remained in good playing condition are very rare. However, for this recording we have had the priviledge of using one of the few surviving and perfectly functioning oboes that dates from the time of Vivaldi. The maker's name, 'ANCIVTI/A MILANO' is inscribed on the bell, and the date '1730' on the instrument's middle joint. The upper and middle joints are made of ebony, while the bell is rosewood; it has four ivory rings, three silver keys and a peculiar decoration consisting of round ebony inlays inserted in the ivory ring at the lower end of the bell. Its total length is 574mm, the minimum inner diameter being 5.9mm.
Thanks to the African wood of which it is made, the instrument has retained its excellant qualities of timbre and intonation. Most 18th century oboes are made of boxwood, which warps with time becuase of its irregular texture; this is why over the centuries they have lost their original measurements and proportions, and with them the tuning as concieved by their maker. 18th century Italian woodwind instruments vary greatly in pitch and speaking length, thus testifying to the many different standards in use in the peninsula. The oboe played here works well at A = 415 Hz.