Quest of the Exiled - text


Weapons raised high, and the crests were even
higher
Deafening rors from the mountainous fires
Visions are affixed on the mightiest treasure
Villainous conflicts are exacted with pleasure
Storms commence and shadows befall
Swarms dispense the cackling calls
fotky 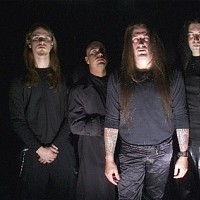 Closer and closer they feel it in their hearts
Yearning the closure for their lives ron apart
Tasting the revenge and loving hatred
None hasting to avenge the prize is awaited
Across the hills and dales,
and beyond the coastal plains
The arbors, the thickets
and past the relentless rains
Through the desert marshes,
and all the flood laden valleys
Crested harsh are the blood maiden galleys
Days turn to months, and months turn to years
Praise burns the suns that lessen their fears
Strength has arisen adrenaline high
The weak are visited Incarnadine thrives
Onward towards the horizon they travel with pride
Carrying in honor all the comrades who died
Marching relentlessly,
the Exiled never lose sight of the quest
Embarking bequestingly, spent and viled,
Conquering the ultimate test
Dignity and pride lead the unwavering attacks
Unity applied speed the favoring acts
Victory and success conquering all enemies
Sanctity, noblesse, pondering all to serve thee
Ashar, Drad, and Kolar aid the ensuing mass
Two moons, one star, give praise to the ruining
chaste
They held the silvery pendant high in adulation
The four points intercepted the four enclosures
Arms raised towards the antiquated temple
The exiled are reborn,
and heed the call to Serpithia