There came the word they were waiting for
Their warlord was screaming ATTACK!
Hungry for battle and enemy blood
They would never stop 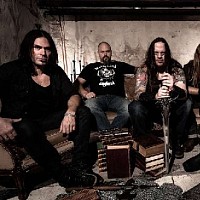