Sdílej
The devastation of our world is at hand
Led by war and hipocrisy
Even the gods, mighty and strong
Have to take the blame for the end of the world 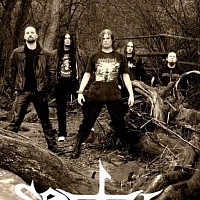