Twisting on a spindle, these giants entwined
Forces compounded inside, a nucleus encapsulating
Since the dawn of our time, and in time before then
A legend of beasts and of men, cycles of life and of light and of darkness
Now come to an end, but not as our fathers foretold! 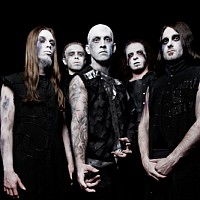 Eternal! Senses frozen and crystallised, captors now spinning a web spanning
Oceans and mountains, symbiotic morphing in unison!
Judgement passed in the minds of great men
The lords of our kind now lost in a vacuous unknown
State of despair, empty without an inbred hatred for brothers
Time now becomes an omission, elitist values devolve into stagnation
Extremes of human nature now gone, erasing our reason to be!
A frantic delusion takes hold, desperately seeking a vision or value
Kingdoms now crumble and fall, the devoid illusion of man!
Standards raised in faith
And now the earth, perspires in fever!
Timelines collide into silence, the last drop of sand drops like thunder
Deafening the earth from it's core, pulsing a shockwave within
Lands once divided by waters, and divided by minds, are washed free
Of the past they created, not from gods but themselves
In a moment of madness, lost in obscurity
Coordinates aligning, centuries' predictions the wisdom of man
A microcosmic failure and delusion of grandeur
Whose power had not yet been given, or met with our comprehension
A pandemia once lying dormant, now awakens
A flash of light divides us all!