"Never wake up the dead..."
The gates of hell are open the dead unleash the curse
relentless evil powers from the deep of putrid earth
the priest is hung upon the tree
on sacred ground his blood ius spread
spirits coming from beyond the sacrifice is almost done!


Father forgive us... they're screaming in the night
The gates of hell are open out from the night the demons rise
soulless and insane...their portal to the graves
on sacred ground blood won't be spared
buried alive by the evil dead
unholy priest condemned his soul, black magic to obscure the world
fotky 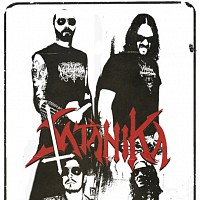 Father forgive us... they're screaming in the night
Welcome to the gates of hell...die alone at the gates of hell...
"...The unholy priest condemned his morbid soul to hell..."
Formless creatures obsess you in the graveyard
the living dead are among is drenched with blood
resurrected from their tombs to obscure this putrid world