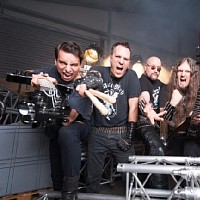 Darkening the sky - Black legion's wings
Loyal to the crown of their dark king
Falling from the sky - Hell's plague of doom
Mankind dies - The earth it's silent tomb
"Ladies and gentlemen. This will be our last broadcast.
Evil incarnate has conquered our world.
It seems like there's no way to escape the wrath of the undead legions
that have emerged from hell.
May God be with us! Harris Johns for CNN network."
(solo: Jonas)