Sdílej
Time is running out and there's no place to hide
The end was just a nightmare but now within sight
Since we've been replaced by soulless machines
We have lost control, we've lost our belief


The struggle of the nations to rule and dominate
Will lead to global chaos and terror will prevail
Still we're walking blind on the brink of chaos
No sign of regret, no messiah can save us
Now nothing can ease this growing fear
Towards the edge of time
Armageddon's near...
fotky 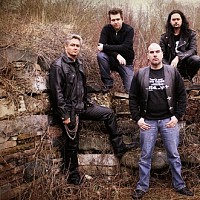 Now the old predictions and prophecies come true
The final battle of man's age is near
The world is doomed
Massive armies will arise to annihilate mankind
On the path to self destruction
The blind leading the blind
We thought we'll live forever and we ignored the signs
The greed became our passion, we kept living with lies
Our deceptive prosperity, a gift of the elite
A dark order conspiracy, there's no way to escape
Now nothing can ease this growing fear
Towards the edge of time
Armageddon's near...
Ages in chaos, ages of war
The countdown to Armageddon has begun