Cars are blown apart and people are torn
Because of the war with the V.S.A.
Horrific events close to our homes
People get killed when they step outside 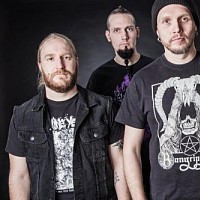