Creation To ExeQtion (The Audio Biography Of A Serial Killer)

Sdílej
See back in the 1970's it was like
I was a fetus in a jar, conceived in a lab
Raised by scientists, no mom or dad
I was the the first human clone
All throughout of my life I was all alone
Living in a room similar to a jail cell
And a government lab and it was real hell
Located deep in the South Pole
So even if I could escape, there was nowhere to go
Throughout my childhood I received no love
Just experiments from men in lab coats and rubber gloves
Sticking me and bricking me, testing my piss
I wasn't a child, just a new experiment
No exposure to the outside world
No toys, no books, no other boys and girls
I was a human guinneapig like a lab rat
Even an animal don't deserve that
The project would have been finished when I was twenty one
I was to be killed, but they had no more funds
So they had to bring me to the states
Put me on the jet and placed me in the straits
The jet took off man, I was scared as shit
I looked at the world and I thought "This is it"
This is were I wanna be, running free trough out the meadows and the trees
Because I hate the human race, they're so fucking cruel
They created me but I wish they hadn't do it
The jet was shaking, whoa we're going down
Its outta control, we're plummeting to the ground
We're losing altitude and we're going down fast
I jumped into my seat and then the plane crashed
I was okay except for a few bruises
Everyone else dead, good fucking losers
But now my dream has come true and I'm free
To take out all my aggression on humanity
And I will make them pay, for being so inhuman
And then they wonder why I'm so fucking insane


You should have killed me when you had the chance you cruel heartless pricks
Cause now... I'ma take out all this anger and aggression on every human being I see
In any abstract, sick, twisted way I see fit
Hahahahahahahahaha Hahahahahahaha
fotky 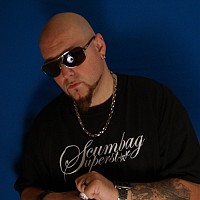 That's my story boys and girls...

Creation To ExeQtion (The Audio Biography Of A Serial Killer)