Speakerboxxx / The Love Below

Sdílej
Hold up!
Oooh, oooh! Somebody done told you you wrong!

[Verse 1:] Ok, I start out all alone
`Cause my baby mama left me
Now there's nobody at home
Beginning to feel like Ms. Jackson done got cloned!
Well it's some real shit and I'm lving it through this song!
A moving vehicle took my family
As I slept out on the sofa in the Boom Boom Room
I woke up very upset!
I throw the covers back and peek out of the draperies
My daughter, my baby, my baby mama all escaping me!
In the wind, she was my friend
Like Princess Di before she died
Therefore we tried and tried again
But in the end you pay attention to the pluses
But the minuses behind make it seem like you can't win! 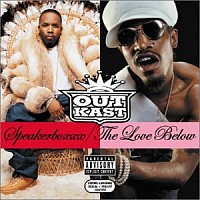 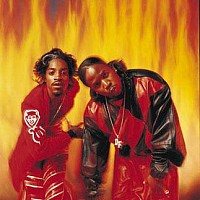 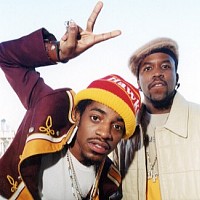 [Verse 2:] Round two, a single parent, what is Big to do?
Throw a parrty? Not hardly!! i'm trying to stay up outta that womb!!
Or that p-u-s-s uss! I said uss!
Luther Vandross couldn't make a home out of this house that we smooshed
Smashed, pushed to the limit! Smash and turned it timid!
Hell everyone was suffering, the house was feeling wicked hell
The cat got sold, the dog got old, the food got cold!
Both of our tempers were on swolle
For the most part you fuss, fight, fart!
You build it up to break it down and now take it from the start
Repeatedly leading a path that only ends in a clash
Of two stubborn minds, grown folks blind to the sign!
[Hook]
[Verse 3:] K-O, knocked out by technicality
The love has kissed the canvas
Now the whole family is mad at me
My daughter don't want me at her PTA meetings
And then my son he can't talk, when I change him he's peeing
I think he's pissed!
I can't dismiss the matter of the fact because he saw you and me argue
Now the energy is coming back
Set an example, a positive pattern, keep life on track
But I'm married to the music and committed to the wax, tapes and CDs
Baby please, you make me want to scream!
You're on my team starting first string so why are we arguing?
[Repeat]
[Hook]

Speakerboxxx / The Love Below