A stormy night on the open sea
She felt it was time to cease to be
One last glimpse, one last breath
Saying a prayer, jumping to her death


He saw her jump, and screamed to her
He couldn't imagine this would occur
Immediately ringing the ships bell
As the sea rose and fell in vertiginous swells
They tried to rescue this beloved girl
Through the thrashing water her body hurled
Disappearing and reappearing
Swept away in a massive wave
fotky 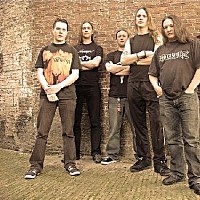 Hope was fading as treacherous waves,
were hammering on these men so brave.
Trying to find her, she who wanted to die.
Looking for her, there's no time to cry
Like a falling cliff, the wave smashes down
In the searchlight he sees her, she is found
Her skin has a blue-ish deathly pallor
A faint desperate smile crept across his face
He knows she's dead, he is jaded
His world went black, his strength quickly faded
He knows they are too late, now it's time to grief
The ocean swallowed her like a dead leaf