This soundsystem kills presidents
They try to shut our noise, we got the evidence
Kids are dying, fuckers are lying, we'll blow up your residence
The razor fence, they keep lying to you day and night
Your family is killed by gas, but they say it's just all right
Now we're back, motherfucker, back right on the track
Tell me scumbag, who's flying the flag
It's a Frank fucking Castle Gonna Break Your chicken Neck
Always antifascist, never politically correct
Nazi threat to waste us, presidents hate us
Antiracist, hoods, combat boots and braces
Straight to them faces, we spit the raw hate
Raise the fist, face the fate, stand up till it's too late
Friends from Jamaica, UK, Spain and Ukraine
You fuck with the kids, nazi scum, you must be insane
Insane in the brain, heavy drugs down your vein
We bring you the pain in slo mo like Max Payne


Straight Outta Moscow Straight Down Your Throat
I'm a skinhead since fourteen, when I was a kid they tried to kill me for Dead Kennedys pin the blade is keen, life is mean, it'a not fair and easy, greasy - not clean But I'm alive, SHARP as knife and putting my nuts on your chin
fotky 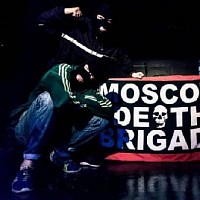 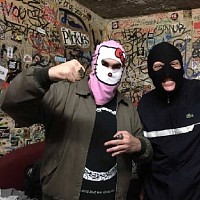 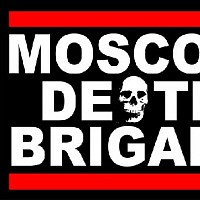 They killed Easy E, don't believe their fake lies
Like authorites back up the Nazis when another kid dies
Anit' it nice? There's no law, roll the dice
The government lies in another poor mother's eyes
My name's Daddy D, but you can call me daddy
Ask your mom why, son, you'll never be ready
You'd better shut up already, step back and listen
Nazi scum you can't front Moscow Death Soundsystem
Straight to hell with them, fuck neutral sissies
"Apolitical attitude" - what the fuck is this?
Tell me who your friend is! I can see thru you, bitch
After all those kids killed, who'd believe you don't snitch
Oi oi skinhead get your hair cut!
Moscow skinhead get your hair cut!
Antifa skinhead get your hair cut!
United world wide! Fuck your pride Nazi fuck