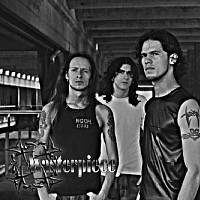 Getting back at somebody else You feed your inner self
Reloading with the fuel of a new war That you’ll never take the control That’s revenge!
For whose justice you’re fighting?
Dominoes’ line has been knocking down
Don’t ya think that the world had it enough?
Or you wanna be part of this sea of blood!
Your brain is using for nothing
Soon or later will be your turn
So it’s better to do a break for the peace
Before you beg for your life
Down on your knees!