Words Lying On My Tongue

First thing I saw was a light on the hill
Flickering in the windows of uncertain old mill
And the moon was high up above
Two riders approaching up against me
Couldn’t see their faces, who could it be
They stopped at the crossroads and lent me a glove


The next thing I saw, two horsemens back
Disappearing in the night, I followed their track
I could not be stopped, not even by a closest friend
Later the darkness was all around
I could hear my breath but no other sound
After hours of wandering I could barely stand
But suddenly, I heard a footsteps
Light from the torch broke nothingness I was within
A stranger I never saw
Said to me
„My friend, I‘ve been waiting for years, where have you been?“
fotky 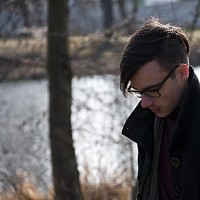 I looked at him, he looked at me
„I’ll be your guide,“ he said seriously
He raised his torch and showed me a way
„There’s a haven waiting,“ stranger kindly spoke
„but only for those, whos life is the joke.“
He lended me his hand, I though he was insane
Voices in my head, I heard them all the time
Arguying how tattered and torn apart am I
And the stranger he still spoke in secret words
Hours gone by, road was still the same
I forgot how I got here, I forgot my name
Next to the grey old stone I saw a dead bird
I was tired, yet I could not rest
I was broken, yet I could not shed a tear
Deep in my mind
I felt fear
On the dismal horizon Watchtower appeared
We opened the door, stepped into the room
Did we get here too early, did we get here too soon?
I looked back and the stranger he was gone
Door locked behind me, heard ticking of the clock
Empty room in front of me, I knew I was stuck
And the cards in my sleeve, I had none
Suddenly a vision came to my head
Am I just dreaming or am I dead?
I saw fire, rain and storm
Mill in the flames, burning in the night
To be embedded in dust, to be hidden from sight
Watchtower glowing, showing to me
Everything that was and whats going to be
And I knew that all is complete

Words Lying On My Tongue