Attention Deficit Hyperactivity Disorder, or better known as ADHD, is a mental disorder that affects an individual's ability to focus
Causing them to move around more frequently
They may also have trouble controlling their impulsive behaviors

One time for them prayin' on my downfall (Yeah)
Two times for the homies in the chow hall (Whoa)
Three times for them hoes on the internet
Shittin' on niggas when they really should get out more
Four times for the days that were all bad (Woo!)
Five times for the bitches who ain't called back (Yeah)
Six times for the kids like me who got ADHD just to— (Brap, brap, brap)

Kidnap a nigga like ISIS (Whoa)
Turn a whole world to a crisis (Whoa)
Walk around the city with a ice pick
I been paranoid, usually, I ain't like this (Boop, boop)
Ain't no tellin' how crazy I might get, uh (Woo!)
Beat the police with a nightstick (Boop)
In my whole life, I been lifeless
Now I'm so fly, I'm a muhfuckin' flight risk (Woo! Whoa)
Fuck a couple hoes 'til I pass out (Whoa)
Niggas throwin' stones at my glass house (Whoa)
I remember sleepin' on my dad's couch (Whoa)
Now I got the Bentley, and it's blacked out (Whoa)
Family lookin' at me like a cash cow (Whoa)
Errybody dissin' just to have clout (Whoa)
Thought you had a chance, now you assed out
Nigga, I'm the muhfuckin' man, where you at now? (Whoa)
Fuck it, I'ma hit 'em 'til they jumpin'
I ain't trippin', this is nothin' (Brap, brap, brap)
I been livin' in the dungeon
I done held a couple grudges
Went to hell and got abducted
Meet the devil, I'm his cousin
I ain't settlin' for nothin'
(Brap, brap, brap)
Got a metal in the truck, I keep a semi when I'm bussin'
Niggas duckin' (Bop)
Even Stevie Wonder could've see it comin' (Brrrap, brap, bop)
I ain't judgin', I just want the money, I don't need a budget
I been hungry, I ain't got no oven (Bop, bop, brrrap, brap)
But I got the munchies, nigga
How you gon' move on the front line? (Woo!)
If I don't fuck with you, I just cut ties (Whoa)
My high school teacher said I'd never be shit
Tell that bitch that I turned out just fine (Joyner)
And no, I don't know you for the twelfth time (Woo!)
We do not share the same bloodline (No)
You love to run your mouth like a tough guy
Hope you keep the same energy when it's crunch time (Woo!)
fotky 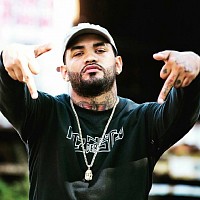