Mayday, mayday, TeeRawk hooked up with KJ
What’s wrong? Why are they both in the same song?
I don’t know but I’ve been told
Hip hop music soothes the soul
On point cuz we keep it in the pole position
We’ve been trying to keep it cool like air conditioning
Got a handful of cards but I’m sick of playing
These cats try hard but don’t hear what I’m saying
Run for cover, if you’re on the wall then get off it
Get this thing shaking like a mosh pit
Jesus, the first and last word of my thesis
We cruise like V6 shift
He’s the rock of ages, peep this
He even cracked the code of the Matrix
And I got my reasons
You can ask Harrison Ford what lies beneath us


Chorus
I am what I am when it all comes down
You know it’s a warning when you hear that sound
They run for cover in the shelter now (Y-O)
There’s not enough ways to say Jesus
So I flipped it
Got Thousand Foot Krutch on the track
And remixed it
Now it’s the same Jesus now, just in case you missed it
Well the name Jesus stays on my mouth like some lipstick
So I flipped it man, I think the world’s gone nuts
So I drop rhymes longer than lines at Starbucks
Now Jesus is trendy kind of like Von Dutch
But that’s more messed up than Donald Trump’s haircuts
Now hold up he got sold out like it was Ebay
Then beat down and scratched up like a DJ
Then they threw his body in the tomb for like three days
But then he came back kind of like instant replay
But it’s Jesus the only one that I’m just speaking
He won’t cost a thing like free nights and weekends
Check the tomb, you’re gonna find a body missing
And that’s a reality show you won’t find on television but...
fotky 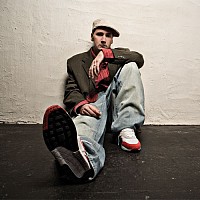 Chorus
By now you know the deal
With a crown of thorns
He died as the king on the hill
And it’s time you recognize exactly what is real
Man I got Jesus, I don’t need Doctor Phil
But for realla He just became the blood spiller
He’s all I need the Prince of Peace and my healer
She carried the child when the Holy Spirit filled her
There’s something about Mary, but not the one with Ben Stiller
It’s Jesus hopefully now you get it
I got saved like the movie with Mandy Moore in it
And it’s, uh, Jesus is who I represent
George Bush is cool
But I nominate Him for president