He was working on a giant toy, a kind of great machine
And asked his mother "Why are you my mom?"
She replied and told him that she'd always been mean
To him as if he'd been a grown-up
fotky 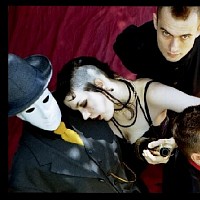 The boy then stopped and went to kiss his mother's hand
Sat at her side, the woman then laughed out:
« You carry your soul like a broken arm
In a loosened white and stained scarf »
She stretched her legs and let her head fall back
On the green couch of the Nevermore Brothel
As she was looking at him, his eyes turned black
He stood and beat her in the Nevermore Brothel
From the door came the father in his old costume
And then he... Then he jumped on his son
And then he strangled him!
The mother then broke a bottle of cheap perfume
As if to say "I'm quite fed up with my knit.
And... Anyway... You are BOTH as BORING as my SILLY WORK!
I'd rather DIE right now, my life is done!
MY LIFE IS DONE!"
Daddy dropped his son and laughed mouth wide
In the main room of the Nevermore Brothel
The son, cheerful, ran to his mother's side
And danced around her in the Nevermore Brothel