Sdílej
(Hamilton)
Leslie Odom Jr.
How does an upstart Britain, best known for sitting in jest in front of a desk in the middle of a forgotten slot on late night, far from Manhattan chatting with Hollywood phonies, end up being the guy who host the Tony’s?

Daveed Diggs
Considering his pedigree this choice is not a mystery, the one man with two govenors was discovered in the History Boys, with his talk show network honchos saw how this could be a classic exercise in realising corporate synergy
fotky 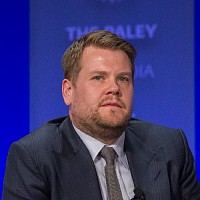 Okieriete Onaodowan
Of course the host of Broadway’s most preeminant affair is in the spotlight, the golden night is not to be embarassing the (??????)of revue was drawing a comparrison, The Tony’s past of telecast they’ve seen Neil Patrick Harris in
Lesie Odom jr.
Well he knows that you’re excited and he feels the very same cause he knows this night can bring you recognition and acclaim cause the theatre’s what he loves it’s the world from which he came, yes the theatre’s where he made his name! And his name is
James Corden
James Corden….My name is James Corden, and these are what I’ll be awarding
(hamilton cast closes in for the Tony)
NO just you wait, just you wait
Ladies and Gentlemen, welcome to the 70th annual Tony Awards!
Thank you for letting me be a part of your special night. I have loved the theatre ever since…you know what, let me tell you a story.
There once was a boy, I won’t use names, let’s call him…James. Cute kid, big eater. Now the greatest joy that James ever had was when he, mum and dad would go to the theatre.
He’d take his seat in the rear mezzenine
the lights would go down and the curtain would rise
on some wonderous, astonishing, magical scene
unfolding before his spellbound eyes
the house was enthralled,
the boy most of all
and as he watched in delight
a thought…a flash…an idea
would enter brain right….
that could be me up there
on the stage with them
I could be in that show
saying that line
playing that part
give me an hour I’ll know it by heart
getting those laughs
feeling that passion
taking a bow when it’s done
oh that could be me
that could be me
and that could be a lot of fun
(Les Mis)
that could be me up on the barricade
I could be Jean Valjean!
fleeing Javert,
guarding Cosette
rueing the day that I stole that baguette
bring him home
being a hero
hearing the people say
oh that could be me
and that could be
a miserably wonderful thing!
One more dawn
One more day
One daaaay
(Phantom of the Opera)
I could be Phantom haunting the Opera
wearing my yin-yang mask
singing my heart out
for mid-western mums (girl sings)
Japanese tourists
and teens after proms
(the Lion King)
And I could be Simba
roaming the grasslands
learing to (r?????)
watching my father horribly die
in an antelope stampede
(Grease)
I could be Danny, meeting a girl
loving all summer long
(a well a well a well a uh)
going together, like ramalamalamalama
chang chang chang
dinga ding ding ding dong
(Sweeney Todd)
And I could be Sweeney,
Demon of Fleet Street
turning people to pies
(Jesus Christ Superstar)
I could be Jesus Christ Superstar
Spoiler alert He dies!
Oh there’s no limit to the parts I could play tonight!
I could be any role I want and no one can stop me!
(Sound of Music)
The hills are alive, with the sound of
(Music Man)
Trouble! Right here in River City!
With a capital T and that rhymes with P and that stands for
(Funny Girl)
People
People who need people
are the
(Guys and Dolls)
Luck be a lady tonight!
Luck be a lady Tonight
(West Side Story)
Tonight
(Annie)
Tomorrow
Tomorrow
(Cats)
Midnight
not a sound from the pavement
(A Chorus Line)
I really need this job
How many people does he need
how many boys how many
(Evita)
Don’t cry for me Argentina
(Fiddler on the Roof)
And if I were a rich man
dadadadadadadadadadadadadada
(Funny Girl – Again)
Don’t tell me not to live I’ve simply gotta
(trumpet and band just kinda dies bc rant)
life’s candy and the sun’s a ball of butter
(Dream Girls)
And I am telling you
that I’m not going
and the best man I ever known
(Gypsy)
Mamma’s talking loud
mamma’s doing fine
All the time and how did I get here
ten more years and stuck in the background
here I am, hosting the Tony’s
this time tomorrow I’m back on 12.30
Sorry I’m not entirely sure what happened there
I blacked out a little bit
have I, have I ruined it?
I’ve ruined it haven’t I
I’ve ruined the Tony’s
Oprah have I ruined the Tony’s?
Level with me Oprah have I ruined it?
One More?
(42nd Street dance break)
To every future leading man who’s making his debut
In his 5th grade class’s Peter Pan
as pirate number two
To every future dancing queen who’s feet are set to fly
at the tiny toddlers tap routine next Sunday at the (Y?)
To the Theatre kids from any place with stardust in their eyes
of every colour class and race and face and shape and size
to the boys and girls, transgenders too, to every Broadway Would-be
Don’t wonder if this could be you, it absolutely could be!
Ladies and Gentlemen, your 2016 musical acting nominees!
OH,
This could be you up here
on the stage with us
you could be in this show
smiling inside
thinking of how
when you were young
you dreamed about now
sharing these words
living this moment
being a part if this song
oh this could be you
this could be you
this could be where you belong
this could be where you belong