Bare of faith yet filled with hope
Stripped naked of logic and revelling in anxiety
Willingly exposed to such irrationality
As wide pupils behold the most macabre of epiphanies
Drifting aghast, drifting afar
Plagued and healed
Surrounded by them again and again
Devoid of sense and will
Oblivious to conscience and numb to pain
A mind raped and healed
fotky 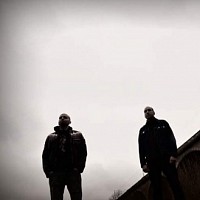 Self-inflicted dread becomes the remedy to sheer abjection
Bathed in blight
Slowly desensitising
Morbidly watch it turn into your solace and partner
And panic will lead to quietude
through endless paths unspoiled by light
And fear, now a timeless virtue
Recoil in curiosity, plagued and healed
As dread and fascination slowly entwine
Crawl towards the earth where God lies buried
As the echoes of laughter die out
Crawl towards the earth where Gods lie buried
Slowly, writhing, retching
Down on the carpet
Crawling on a shallow pond of blood and vomit
Hallucinations aflame
Ready to reach the most colourful, climatic, glorious decay
An exquisite abhorrence
Flooding in red