Desecration (Of The Heavenly Graceful) - text

Sacrifice everything holy in sight...
By the signs of the infra-world
Which delivered the most horrific prophecies
We take this legacy of sacrilegious prosperity and punishment
To commit the slaughter of all that is holy and pure. 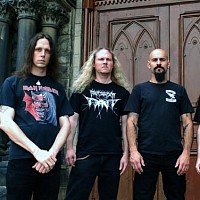 A trip to the mental inferno
Swarming with the everlasting stench of rotting corpses
Malicious power flowing in these rivers of madness
I summon the damnation of the pearly paradise
My spell will torture their golden illusions
Chaos and utter decay are waiting to be released
From this ancient and blasphemous entity
Feel our dark hate hammering and raping your so-called god
Sacrifice everything holy in sight
Desecration of the heavenly graceful...