Sacrifice with the golden rod
Ancient rites, satisfy the gods
For Babylon, queen of all the lands
May the stars lead the masterplan


Screaming, bleeding, the prophet's dreaming
Straight to the gates of the Gods we'll go
Babylon, the heart of the empire
Eternally linked to the skies
Your people read the book of the universe
How much blood all over your plains
Falling in the rivers that gave
The splendor to be the Forest of Life on Earth
fotky 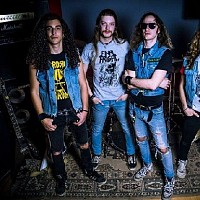 Ishtar, lead us the way
Mother of mortals
Ishtar, show us the way
By the stars, open the gates
Ishtar came to the depths of hell
For love's sake she challenged the dead
Cursed by the minister of death she fought
While she was trapped in the underlife
The world became to wither and die
Silvery mother of all that shines you rose