A squad of the dead, armed to the core
A mission of death, prepare for a coming war
Creatures in the front, too eager to wait
An urge to kill till death, humans in their sight


(Chorus)
Serial murder - Death squad
Strike with lust, for sliced flesh
Human fear discovered, prepare for death
Collect the victims, nail them to the walls
Drain the living of blood, by ripping of their skulls
fotky 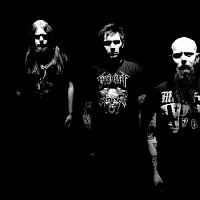 A will to kill the weak
A force of the dark
Children, women and men
All must die
(Chorus)
Serial murder - Death squad
Strictly following orders, from beyond the dark
Murdering and slaying man, animal, all
The pile of death is growing, united to end all life
No one is left to die, the world inferno is alive
Their minds, disrupted
Their kind, forgotten
The tomb, their deathbed
Their lives, bloodshed