War cries are heard from Munster's hills
his brother Mahon, the eldest son
can't hold the sword, to find revenge
united at last, they face the Norse.


A track of blood, awaits our lord
the nothern wolves, by treason slay
wielding his sword, called up the tribes
so Brian arose as Irish High King.
Love songs are heard, from Munster's hills
his wife, his queen, his love and his sin;
the shine of gold, will take its toll.
United we stand, divided we fall.
fotky 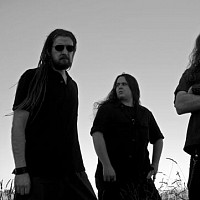 The hands of the king, healing the land,
his eyes can't see, what lies ahead
The Darkness dwells, in Brian's halls
North wind proclaims: It's time for war.
Chorus
Poet and bard, lover and father,
fighter upcast in many battles.
A legend forged in Irish fire.
Honor the Old Man, show your respect.
The nothern seed, spreads in the fields.
They bide their time, to find their chance.
On 1014, dire deeds awake
Draw out your swords for the sake of our King
God bless our souls in this Holy Day
sad songs will sing our victory
The hordes ride swiftly to their ships
A knife in the dark took the life of our King