They believed that everything would work so well
No objection frightened them
Their ears were deaf, their eyes were blind
Ain't no caution changed their mind
Burial at C.
fotky 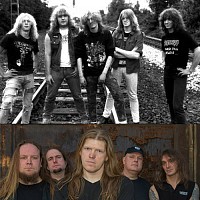 So their members and time passes by
Many faces, different guys
Just a few gigs from time to time
No big deal, but a programmed decline
They split up and the band started anew
Left the weak ones on their way
Left their images behind
To start again on another kind
Burial at C.