The Day Before - text

So what if we manage to stop cruise cruising in, will it make any fucking difference?
To the inevitable countdown to world war three, the power monger's decision
Will it be our lifelong stance, or our only chance, to prevent our world's destruction?
Will it be?


You fucked old Yankee crony git
You screwed up bastard commie shit
You evil hag with blood stained hands
Fuck you, fucking hang...
Fuck it, I just can't see any point in singing yet another wanky war song... the accepted target... can't see no point in mouthing off about atomic power... they know the risk involved, but still freely fuck with our lives... you know what they're doing yet still you let them... you think it will never happen... push it to the corner of them mind and forget it... for it's so much more comforting to 'relax' and don't do it...
fotky 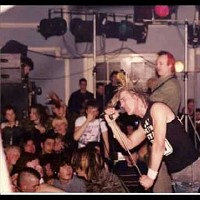 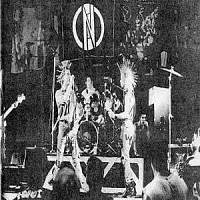 Alternative to this, the masses join the CND
And fly it's helpless protest banner on demos
Listen to the whining wanky labour party
And wait for them to annihilate the fucking lot of us
Pathetic! You fucking bunch of jokers
When you hear the four-minute warning "It's too fucking late "
See your family and friends perish - the eyes melting - the skin shrivelling -
blood boiling - bomb, death, listen, now
There's one minute left in the game to play
Since that day in forty-five we have never had a say
Was it a solution to combat the right?
Or just to stay ahead and never done fight
Thatcher's plaything in the name Manhattan
Another Hiroshima for her to flatten
The protest signs they are spread across the earth
But will our protests pay their worth?