Sniper and Other Love Songs

It is an early Monday morning.
The sun is becoming bright on the land.
No one is watching as he comes a walking.
Two bulky suitcases hang from his hands.


He heads towards the tower that stands in the campus.
He goes through the door, he starts up the stairs.
The sound of his footsteps, the sound of his breathing,
The sound of the silence when no one was there.
I didn't really know him.
He was kind of strange.
Always sort of sat there.
He never seemed to change.
fotky 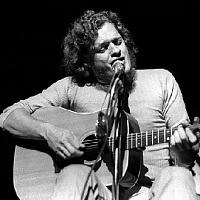 He reached the catwalk. He put down his burden.
The four sided clock began to chime.
Seven AM, the day is beginning.
So much to do and so little time.
He looks at the city where no one had known him.
He looks at the sky where no one looks down.
He looks at his life and what it has shown him.
He looks for his shadow it cannot be found.
He was such a moody child, very hard to touch.
Even as a baby he never smiled too much. No no.No no.
You bug me, she said.
Your ugly, she said.
Please hug me, I said.
But she just sat there
With the same flat stare
That she saves for me alone
When I'm home.
When I'm home.
Take me home.
He laid out the rifles, he loaded the shotgun,
He stacked up the cartridges along the wall.
He knew he would need them for his conversation.
If it went as it he planned, then he might use them all.
He said Listen you people I've got a question
You won't pay attention but I'll ask anyhow.
I found a way that will get me an answer.
Been waiting to ask you 'till now.
Right now !
Am I?
I am a lover whose never been kissed.
Am I?
I am a fighter whose not made a fist.
Am I?
If I'm alive then there's so much I've missed.
How do I know I exist?
Are you listening to me?
Are you listening to me?
Am I?
The first words he spoke took the town by surprise.
One got Mrs. Gibbons above her right eye.
It blew her through the window wedged her against the door.
Reality poured from her face, staining the floor.
He was kind of creepy,
Sort of a dunce.
I met him at the corner bar.
I only dated the poor boy once,
That's all. Just once, that was all.
Bill Whedon was questioned as stepped from his car.
Tom Scott ran across the street but he never got that far.
The police were there in minutes, they set up baricades.
He spoke right on over them in a half-mile circle.
In a dumb struck city his pointed questions were sprayed.
He knocked over Danny Tyson as he ran towards the noise.
Just about then the answers started comming. Sweet, sweet joy.
Thudding in the clock face, whining off the walls,
Reaching up to where he sat there, answering calls.
Thirty-seven people got his message so far.
Yes, he was reaching them right were they are.
They set up an assault team. They asked for volunteers.
They had to go and get him, that much was clear.
And the word spread about him on the radios and TV's.
In appropriately sober tone they asked "Who can it be?"
He was a very dull boy, very taciturn.
Not much of a joiner, he did not want to learn.
No no.No no.
They're coming to get me, they don't want to let me
Stay in the bright light too long.
It's getting on noon now, it's goin to be soon now.
But oh, what a wonderful sound!
Mama, won't you nurse me?
Rain me down the sweet milk of your kindness.
Mama, it's getting worse for me.
Won't you please make me warm and mindless?
Mama, yes you have cursed me.
I never will forgive you for your blindness.
I hate you!
The wires are all humming for me.
And I can hear them coming for me.
Soon they'll be here, but there's nothing to fear.
Not any more though they've blasted the door.
As the copter dropped the gas he shouted " Who cares ?" .
They could hear him laughing as they started up the stairs.
As they stormed out on the catwalk, blinking at the sun,
With their final fusillade his answer had come.
Am I?
There is no way that you can hide me.
Am I?
Though you have put your fire inside me.
Am I?
You've given me my answer can't you see ?
I was !
I am !
And now I will be
I will be!

Sniper and Other Love Songs