I woke up on a terrible morning
I should have known 'cause it came with a warning
Switched on the radio and that's what I've heard:
"Watch out for an aggressive bird"


Attacking people on the "B55"
I just woke up like my dog, that's my life
Forgot about the importance of news
So I just gave a shit and I tied my shoes
Finally up, I made my routine
I took my bike and I wiped it clean
Drove my cycle out of the night
Down the alley whee the trees stand tight
fotky 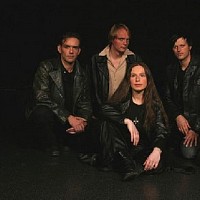