Well, I'm starin' at my Sony, a-drinkin' Kirun beer.
I had a nickel in my pocket when it all came clear.
I hopped into my Honda, it's a little bitty car.
And I'm drivin' down to meet you at the Sushi Bar.
But don't tell me I'm crazy until you hear my plan.
I'm gonna buy two tickets and move to Japan. 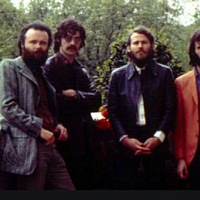