Signals recieved
The parasite awakes, in a peeble mind
Devil sat on his shoulder
Took over the reins
The now fumble guiding a carrion
Toy soldiers, they walk among us
Activated tools of the trade, engineering rather than born
With rage inoculated
All life is fair game 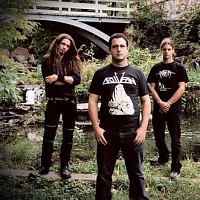 One at war against the multitude, (engineer) rather than born
Tearless eyes whipped by sand
(Programmed) rather than raised
Sleepless children run across (the ravaged lands)
With the serene confidence of the invincible