Army Of The Pharaohs

"Agh! I'm through toying with them! I shall demonstrate the might... "
"And pharaoh said, AND PHARAOH SAID, that I should obey his voice! "
(Celph Titled)
Yeah! It's the god damned army
Fuck you thought! Celph Titled, Planetary, Demoz, Reef the Lost Motherfucking Cauze, the Esoterodactyl
You a fool for this beat, Eso, but right about now, Chief Kamachi, split their motherfucking head! 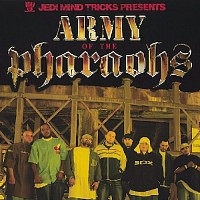 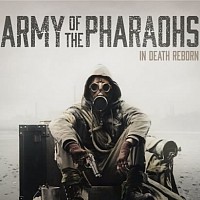 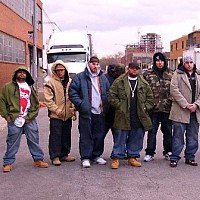 (Chief Kamachi)
Yo, the Pharaohs back, less than an hour's nap
Woke up in a cave on the top of Mount Arafat
Blood on the tarot pack, the power black
Street mystic get you twisted with your barrel packed
One-nineteen they blamed it on some Arab cat
I meditated, and left two towers flat
With the whole section eight Egyptian power rap
Little spump, sparkling bump, no spiritual
Don't let me start with the pump, pecked Faggot preacher pluck a heart for the punk
I got a passion for putting bloody parts in a trunk
It's the Messiah, never been a musical kump
(Demoz)
The colosseum fiending, screaming "Demoz! "
They could see the pour-up from Europe to Lehigh
When they see I'm coming they running I keep nine (Let's go)
Shots for they stomach and face, eat five!
Never will I run from a case like a cheap guy
If I can't afford the lawyer, I'll burn him like deep fry
Undeveloped faggot, I'm classic like Levi's
Rap marathon, I passed them like three times
Take my rap skills multiply by three times
All it takes from my verse to defeat him is three lines
Peep my battle ability weak guy
If I can't walk over you, nigga, I leap high
Shoot looking down when I pass, you scream "Why? " (Why?)
You bit my whole style with no teeth I reply... (Yes!)
You walking on glass barefooted, my sneaks tied
Talking out your ass when you shouldn't you speak lies
"If you are caught by the guerrillas, you must remember one thing."
"What's that? "
"Never to speak."
"What the hell do I have to say to a guerrilla? "
(Planetary)
Yo!
Whenever I say so we full court pressing 'em
Handle the rock and cross over like the rest of 'em
Who got the ratchet? I crack the pendulum
My adrenaline race the pace you trembling
My regiment take shots of bad medicine
Extinguish the game like distinguished gentlemen
Severus so far the best with the pen again
Venomous ink, paint the picture so elegant
Elevate my state, I'm high like a pelican
Powerful punchlines puncture through your skeleton
Space niggas erase niggas irrelevant
Post-up prevalent, in my development
I make the case, so the dope can settle in
"Paz, there's no booze! " so we threw the kettle in
Pharaohs amongst the king of this tenement
You demand sin, and get the pen, and Cryp, send 'em in!
(Esoteric)
Mind bender, line sender
Time ender, Pharaoh front line member
The mic's a divine ember burning you
The blood doesn't trickle, it sprays
I'm like the young Nikita Koloff with the sickle when I'm stripped in the page
For centuries, held down bars like penitentiaries
You entertain, it's funny like Kevin James,
Now stay in your fucking Lane like Clark Kent, you get it man?
Hip-hop's deader than Vince Lombardi
It's full of wine and crackers like your wife's dinner parties
I'm a Pharaoh, swords drawn for battle
Running with apes like Ann Darrow
Reef!
(Reef The Lost Cauze)
I ain't with this rap shit dog, I literally kill 'em
Put the Colt 45 to your lips like Billie Dee Williams
It works every time, I murk every line
It never gets easier, it hurts every time
I been the best, I got kids on the internet
Seeking my approval like they send a fucking friend request
Uh, denied, go, fuck your life
I crump-up your head, and up-chuck your rhymes
Barf, you know vomit and such
You got no fans so you claim being popular sucks
That's called hating, your brain is all vacant
I'd never sit down and eat with y'all, it's all bacon
(Celph Titled)
Demons and gargoyles, lions and wizards
We leaving 'em hard-boiled and frying they gizzards
That's what Celph Titled rhyming will get ya
Act like a bitch guy and get stabbed in the eye with my scissors
Rap super-star for now, hip-hop legend for later
Leave a treacherous crater with a push of this detonator
So who's I'll and who's not? Who's popping and ooh-wop
Who's a cross between El Chupacabra and 2Pac?
Well, who else but you Celph? No sandals on my shoe shelf
Just a pellet gun leave a huge welt
Army of the Pharaohs never make love songs
We finger fuck bitches with Freddy Kruger gloves on
"Most have raw nick.
Not disgusting, seared, burnt flesh.
It is the blood, I must have the blood!
You're catching brains, the blood, from the meat! "

Army Of The Pharaohs texty