Aggression Is a State of Mind

I walk alone in a nightmare dream
I don't care what you think, I know what I've seen it's not pretty
But it's coming just you'll see
Can't fix it all when no one tries
If we don't care our people will die it's a shame
And it doesn't have to be this way!


Man has two intentions, one is to kill so therefor he takes
It's an evil connection, but he says he's not to blame
Society doesn't take a part, it's a scapegoats lie
For a killer's heart, we're not winning
So we lose
We live in a world full of selfishness, we take for ourselves and forget the rest, It's not fair!
But most say that of life
Living life unjustified, procrastinating every time were to blame
And we all should have seen
fotky 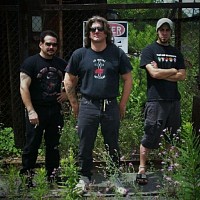 Communication, a common ground to benefit life
For a solemn nation, and respect for human life
If we don't think before we act, we'll face it all it's a hard hitting fact it's the end
And it won't ever change no.....
It won't change

Aggression Is a State of Mind