Sdílej
Colour the skin in red,
why the black man becomes a Fed.
Feed the female to the gator
and her bones preserved for later.
Tell the baby he is wrong,
cut his hands off for what he's done.
Put a blind man's dog to sleep,
tell the widow not to weep.

This cuts too deep.

Put a peace sign upon your breast
and make freedom some kind of quest.
Tell the world that they are wrong,
in a poem or a song.
Take a stand and kick some butt,
before the next one takes a cut.
Be aware and not afraid,
there's too much sense of hate.
fotky 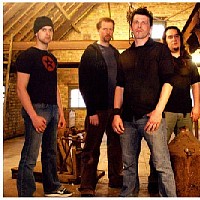 Wish you were away, colour the skin in red.
Why the black man becomes a Fed, noone knows,
but me, it's called democracy.
And tell the baby, and he is wrong,
and cut his hands off for what he's done.
And put a blind man's dog, his dog to sleep,
and tell the widow not to weep.