The Bringer of Dawn - text

A Dream of Poe

Wait! Cast your doubts aside
For you have stumbled for too long.
It is time for a new day, my people,
An empire for the wolves and strong.


Cast you doubts aside
Under the shadow of dying Ymir.
It is time for a new story, my tribe,
To be written on the scrolls of Thoth, the scribe.
It matters not death and misfortune
If we shielded ourselves against doubt.
Sing higher the song of Lusitania
In our land grieved by drought.
fotky 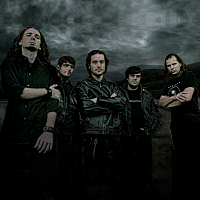 Lucifer rising, a comet blazing the sky
Cometh forth to light the old empire.
And in my right hand, a flaming sword to defy
The bull and devourer—Europa’s defiler.
Set your eyes at sunrise,
Beyond the Tagus flowing in our hearts.
Free from dismay and demise,
A new renaissance of men and arts.
I bring gods enslaved.
Divine artefacts to prophesy.
At your hands, my sombre people,
An empire that none can deny.
It matters not howls of holiness
If we slain the legion of the dead:
Those who blindly follow and chant
Their righteousness while leaving a path of dread.
While they sleep, we slay
While they falter, we burn
While they coward, we purvey
The fear promised by my return.

A Dream of Poe texty